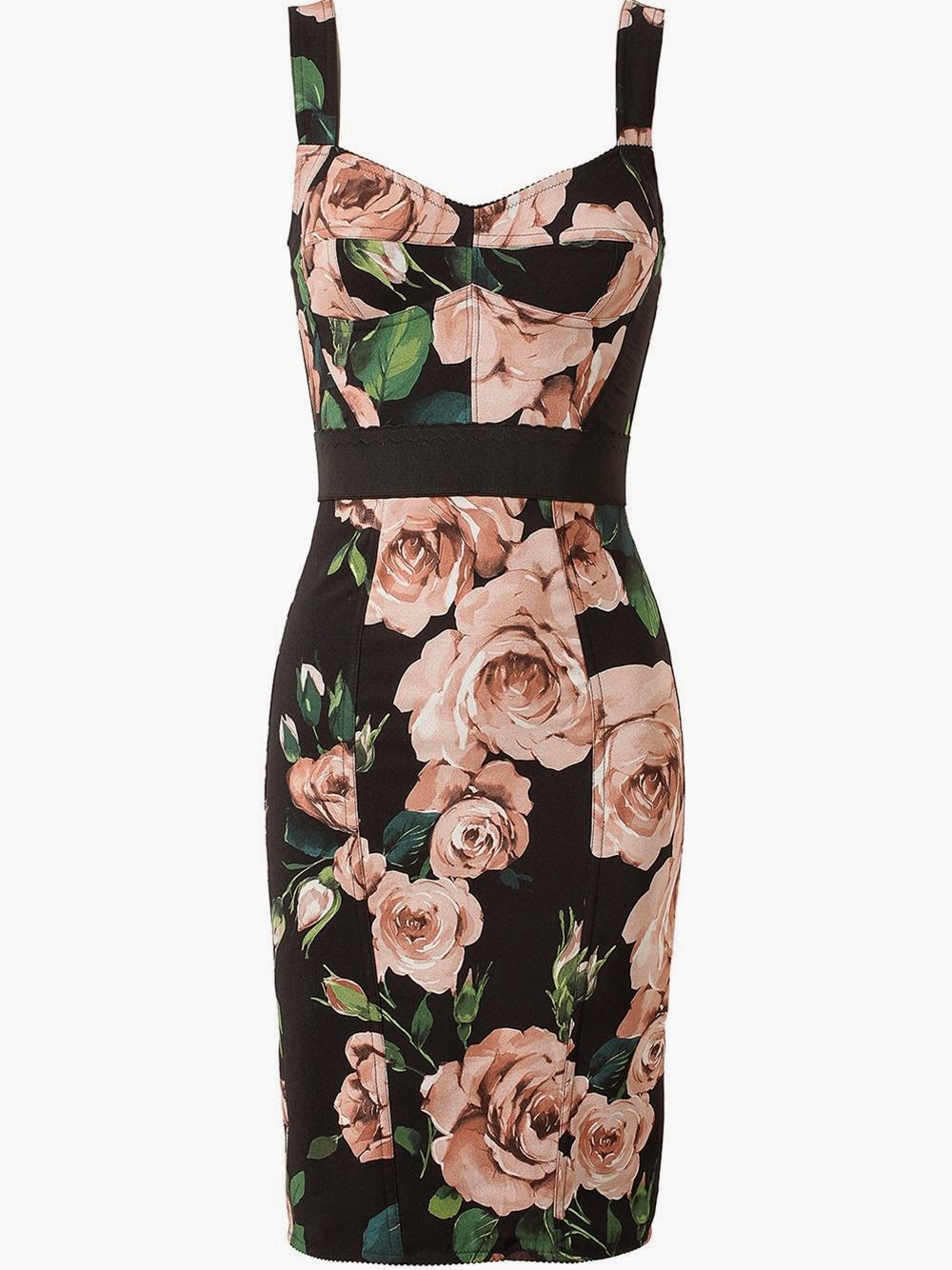 Dolce & Gabbana came up with a stunning rose print that was available on skirts, dresses and blouses, and was snapped up by many fashionistas. Dorothy Perkins (DP) seems to be tapping in to the popularity of the print with their 'floral pleated bodycon dress' which features a suspiciously similar print. The print has been borrowed by countless other brands, but it was DP's use of it on a similar style dress that made it really stand out for me. 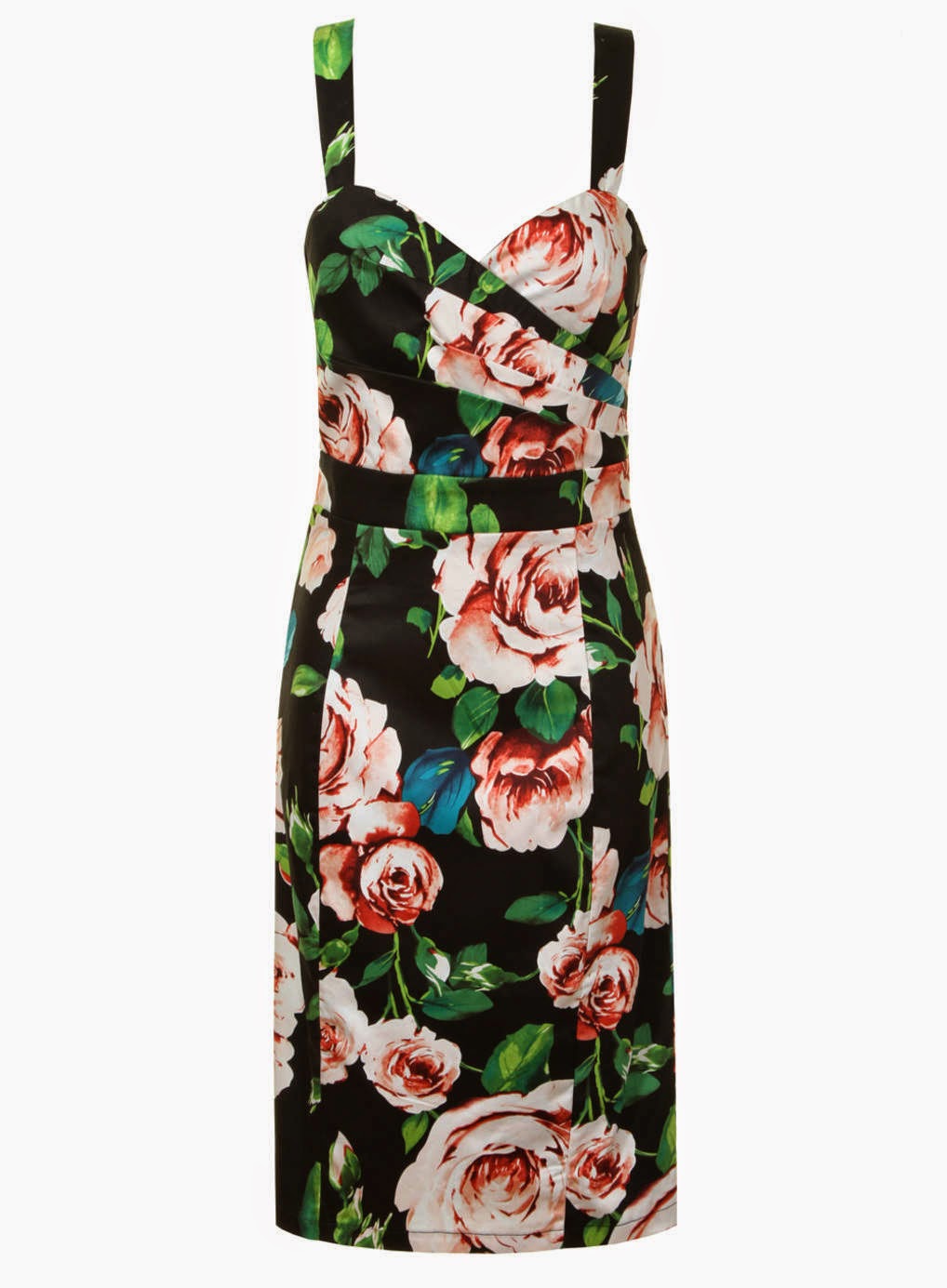 As soon as I saw it I thought "Hey, that's D&G!" but quickly discovered that I was wrong. Although it is notoriously difficult for designers to protect the shape and style of garments, they do have some protection in the form of copyright. In the UK at least, original artistic works, which includes prints on fabric, are automatically protected for 70 years from the end of the calendar year in which the last remaining author of the work dies. This means that the work cannot be copied or adapted without the consent of the owner.

So, is D&G's print likely to be covered by copyright protection? In my opinion, it is, particularly considering the size, colour, placement and artistic interpretation of the flowers, with the inclusion of rose buds, set on a black background. It remains to be seen if D&G will pursue this issue with Dorothy Perkins, and I'm sure DP are proud of their 'D&G-inspired dress', but all I can see here is blatant copyright infringement. I personally wouldn't cross D&G and their team of lawyers! 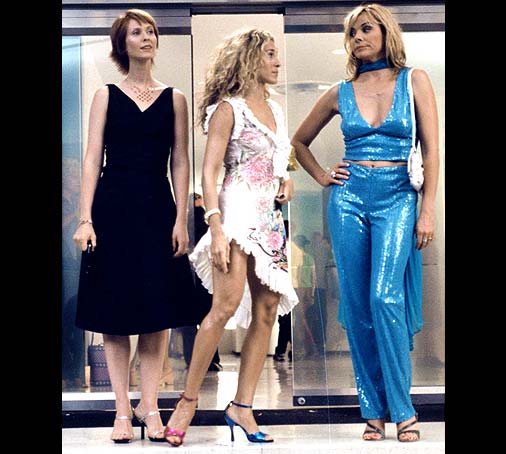 I've been watching SATC between study sessions, and it has got me yearning for heels! Not the sky high styles that are so prevalent at the moment, but the kind that you can actually totter about on for more than 5 minutes. Carrie is known for her obsession with cute strappy sandals, and in an effort to find myself a piece of her SATC style, I have been hunting around for similar heels. I'm not interested in the sensible, go with any outfit shoes, I'm interested in the verging on the ridiculous/vulgar shoes!


So the shoes in the star are the ultimate dream shoes - Jimmy Choos! But the other shoes are affordable, so I hope to add at least one pair to my collection.

Do you love Carrie's shoes in SATC? Would you want to trot around town in any of these pairs?

Email ThisBlogThis!Share to TwitterShare to FacebookShare to Pinterest
Labels: carrie bradshaw, fashion, sex and the city

Even if you have never heard of Isabel Marant, you will almost certainly have worn something inspired by one of her collections. She designs the kind of clothes that you can throw on and rush out of the door, but still look chic in. In a recent interview with The Telegraph, she didn't shy away from spurning those who copy her designs.

Perhaps her most famous creation of late has been her unique take on the wedge trainer, which has been copied incessantly for months. But Marant believes that "everybody who has the wrong one looks quite bitchy, very vulgar, when mine are not at all." Something to bear in mind when you're thinking about buying that £30 pair of dupes. 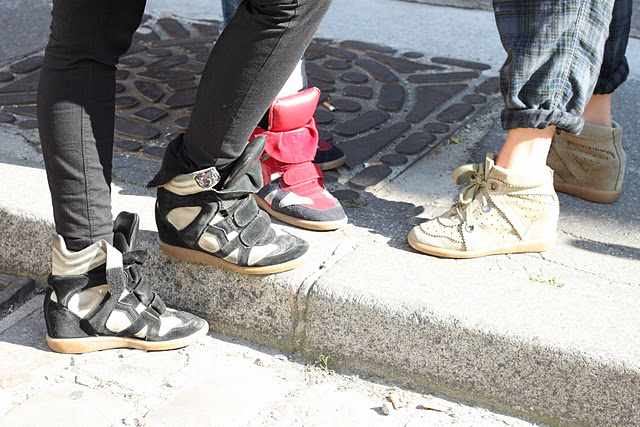 Isabel Marant fights counterfeiting constantly, and there's even a page on the brand's website dedicated to ensuring customers don't accidentally buy fake items. Copied and counterfeit goods have a huge negative impact on designers, not only financially, but also creatively. Marant points out that "as soon as you have an idea it's copied and you don't like it in a minute."

How do you feel about counterfeit goods? Would you rather save up for a pair of Bayleys, or buy a fake pair and five other pairs of shoes?

'A Question of' Trademark Infringement

A Question Of is a relatively young brand which was established in 2010 by three friends who believe in sustainable fashion. As a socially responsible brand, their clothes are made in Africa from organic cotton.

So far, you're probably thinking that this is a great brand who have perfected the balance between cool and ethical clothing, and I most certainly agree. Where things start to go a little wrong is the belief that "their digital prints and slogans [are] developed in collaboration with a line of talented artists."

As can be seen in the photo above, A Question Of are currently selling tops with the slogan 'Hello Kitty'. Unless you've been hiding under a rock your whole life, you'll know that Hello Kitty is a little Japanese bobtail cat who was born in London in 1974, which is now a global brand worth $5 billion per year.

A quick trademark search on the Intellectual Property Office website confirms that, as I suspected, Hello Kitty is a registered trademark.

What do you think about this issue? 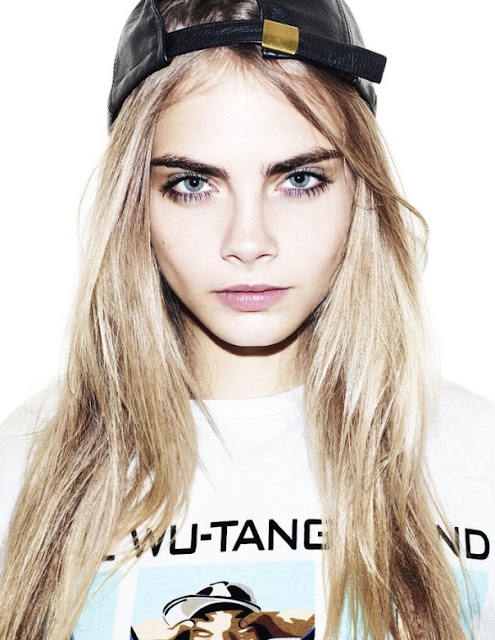 You've probably heard by now that Cara Delevingne, a lady who needs no introduction, has made the business savvy move of trademarking her name. She filed to register a trademark in December 2012 and was granted protection in January.

You may have read some reports where the journalist was perplexed as to why Cara would want to prevent others from releasing items such as walking sticks and emery boards with her name on. Even Sara Karmali at Vogue.com was confused. What such journalists don't know, and obviously couldn't be bothered to find out, was that when you file for a trademark, you have to specify the classes in which you want trademark protection. So, Cara has protection in four classes related to fashion and accessories. It doesn't mean that she plans to release every product in every class. It's just the way the system works. You specify the class of goods, not the particular goods you plan to release.

What I think is much more interesting than the speculation over Cara branded walking sticks and umbrellas is the fact that now Cara has trademarked her name, she has five years to put the trademark to 'genuine use' or the registration will be revoked (Trade Marks Act 1994 s.46).

What does this mean? Well, we can expect Cara branded goodies pretty soon as Cara is likely to want to assert her ownership of the trademark.

Cara will reap many benefits from registering her name, not least that she won't have to rely on the common law action of passing off, which is the only protection offered to the owners of non-registered trademarks, and which incidentally is incredibly hard to prove. 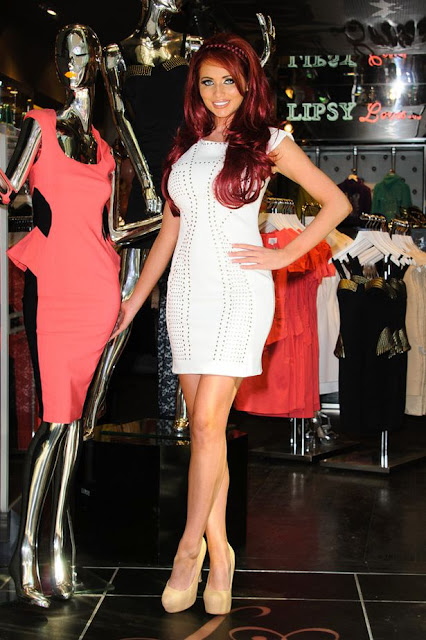 Those of you outside the UK probably haven't heard of Amy Childs. Even though I am in the UK, all I know about her is that she is a bimbo from the TV show The Only Way is Essex (TOWIE), a structured reality show that follows the lives of tango-ed rich kids who seem to have been deprived of even the tiniest amount of common sense. Surprisingly though, TOWIE is really quite popular (probably for its comedy value), and as a result, many of the so-called stars have decided to try and make a quick buck by putting their name to a line of dresses, or make-up, or frankly, whatever they can get their hands on.

This is where Amy Childs comes in. She has put her name to a line of dresses at Lipsy, the much-loved party dress retailer. The line mainly features lace bodycon dresses, and we are led to believe that Amy had some say in the design of the dresses. But what really makes me laugh is the Lipsy x Amy Childs "Laura" dress, because really, it should be called the Stella McCartney Octavia Tri-Tone Sheath Dress. 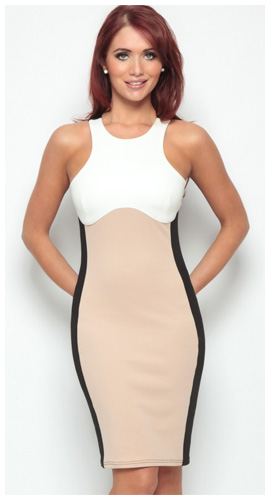 What frustrates me the most is when a British fast-fashion retailer knocks off the design of a ridiculously talented and hard-working British designer. Stella's contribution to fashion, and in particular to British fashion, is incredible. Even though she is the child of Paul and Linda, she still had to work hard to achieve her goals, studying at Central St Martins, and interning at Lacroix and Edward Sexton on Savile Row. She is a truly talented and accomplished designer.

And then Amy Childs and Lipsy come along and rip off one of her designs. I really do find it gross. Even though knocking off other designers isn't illegal, it is creatively lazy and disrespectful. And, in collaborations such as this, I really do wonder why, when Amy and Lipsy literally could have designed ANYTHING, they chose instead to knock off Stella.

What do you think?

1. Neon boots - Came across these boots recently, and I just think they are gorgeous! They come in lots of different colours, and I imagine they are really comfortable. Perfect for winter or spring!

2. INCT Top - This top may be slightly offensive, but isn't it great? I'd probably order a large size and wear it as a mini dress with fun leggings.

3. H&M Skirt - I squealed with joy when I found this skirt on the H&M website. I'm a sucker for anything with horses on, so this skirt is a dream for me!

4. Giorgio Armani jacket - This is my dream item of the week. It's so wild, and yet could potentially look so damn chic with flared tailored trousers...

5. H&M heels - The perfect heels for spring. Scrumptious sorbet shades, with a comfy platform and a block heel to help me stay upright!

6. Romwe lips bag - I need a new small cross body bag as the one I've had for years has finally started to fall apart and look rather ratty. I love the gold lips on this bag with the gold chain.

7. Cheap Monday twist bracelet - Fell in love with this bracelet the moment I saw it. It's made from the kind of metal that tarnishes really beautifully. It's so simple yet quirky, perfect for when I'm in a rush and need to throw some jewellery on.

8. Topshop maxi skirt - I love maxi skirts. They are comfy and I feel safe in them on a blustery day. This print is so pretty and will go perfectly with a knitted jumper.

What's your favourite item from my list this week?